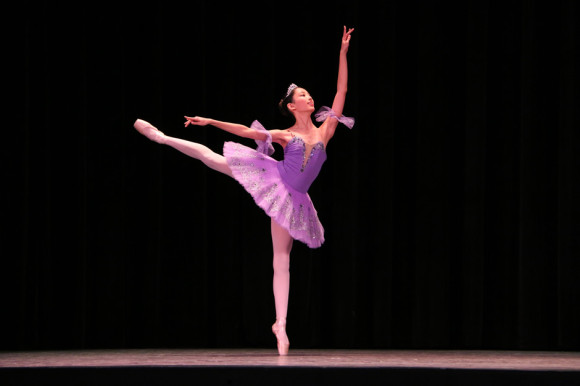 The summer is always a busy time for ballet dancers and this summer was no exception for students and alumna of Greenwich Ballet Academy.

Allison Chen, a level 6 student from Millwood, New York has been learning to dance ballet at Greenwich Ballet Academy for 4 years. This summer she danced at the Bolshoi summer intensive. Her continued improvement and future potential was noticed this year by the faculty of the Bolshoi summer program. At the end of her 6 weeks she was offered the opportunity to travel to Russia and attend school full time at the school’s Ballet Academy in Moscow, Russia.

“This is a wonderful achievement” said LeAnn Lindsey, Chairman of Greenwich Ballet Academy “and is a testament to our quality of training and also the talent that Allison brings to GBA.”

“We are very excited for Allison” said her Mother – Jane Chen. “It a great honor for Allison to receive an invitation for full time study at Bolshoi Ballet in Moscow. She has worked really hard at her ballet for many years, she was very focused on improving her technique and strength in the Bolshoi summer intensive. It is so nice to see that the many hours in the studio are recognized with awards such as this.”

Allison herself was honored at the opportunity “There are so many well-trained dancers who attend the Bolshoi summer camps – to be singled out and selected for this incredible program is so exciting. I have a lot to think about!”

Allison is following in the footsteps of Greenwich Ballet Academy’s prior student – Dominika Tomzyk – who recently graduated from the same program in Russia. Dominika – from Shelton, CT – left GBA 18 months ago after she was offered the exact same opportunity as Allison. Dominika accepted and followed her dreams to Russia from which she has recently returned.

While in Russia Dominika studied under Irina Pyatkina.

“I became aware of the importance and intricacies of artistry within each emotional performance. The Russian’s attention to detail and hunger for the arts is unlike that of any other culture. In this sense, I became more mature.”

She also had to step up and fend for herself with the responsibilities that came with living on her own in a foreign country. This included learning Russian. “Each class was taught in Russian, and I quickly had to learn the language to understand my new surroundings.”

“I am so grateful for my experience, I left prepared for the future as both an artist and individual. “ said Dominika.

With her new-found language skills she was able to communicate and connect with other students living in the dorms.

“Together, we shared an experience that was a dream of mine ever since I was little: performing on the historic stage of the Bolshoi Theatre. Dancing on the stage of legendary prima ballerinas left me with shivers, and motivation to push my potential.”

Now that Dominika is back home in the US she is planning to kick-start her dance career. She plans to matriculate at the Macaulay Honors College at Hunter College and simultaneously continue her ballet under the mentorship of some of the wonderful teachers based in New York City.

“I can’t wait to take advantage of the limitless opportunities New York City has to offer” said Dominika.

“I am so proud of our Allison and Dominika” said GBA’s Artistic Director. “Having teachers that have trained and performed in Russia helps our students shine on stage and in class.”

It is clear that GBA has hit upon a winning formula. “Our foundational technique programs are critical to allowing our students to build the base from which this level of success comes.” said Mrs. Lindsey.

“When you combine strong technique with a group of teachers who are committed to helping students be the best they can be – then you see the result that we have seen this summer.”

For anyone interested in a top-notch ballet program that does not require you to travel into the city every day – Greenwich Ballet Academy is clearly one of the best there is.

And for Allison Chen … will she follow Dominika to Moscow – or will she instead continue to take advantage of the remarkable training offered at Greenwich Ballet Academy? Stay tuned.