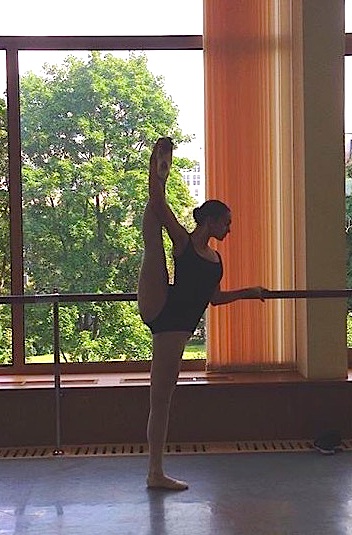 Greenwich Ballet Academy welcomes home one of its most talented students, Dominika Tomczyk, from her summer studies at the Bolshoi Ballet Academy in Moscow – a dream come true for this committed dance student from Shelton, Connecticut.

Dominika is now the second GBA student to have received the prestigious National Security Language Initiative scholarship to support the study of Russian language, culture and ballet, offered by the U.S. State Department and Russian American Foundation. The competitive program draws applicants from the nation’s most talented dancers and exclusive ballet schools.

“We are thrilled to have Dominika home, and now we expect her to practice her Russian language skills with her instructors too,” said Marisol Rivera Thurman, board chairman of the ballet academy. “More important, we’re so pleased that Dominika’s hard work, combined with the caliber of her talent and the exceptional instruction offered at GBA, led to this Bolshoi Ballet experience for her. This is a truly life-changing experience for Dominika.”

Dominika calls the Bolshoi opportunity magical, especially after she worked her way back from a 2014 stress fracture injury while studying at a summer intensive in Houston. Coming back to full strength after four months off for rehabilitation took exceptional commitment that demanded a dance schedule of six days each week, all while Dominika maintained her academic excellence. The scholarship was well-deserved, said Rivera Thurman, and reflects the same excellence she brings to her environmental science studies at Trumbull High School, where she focuses on agricultural science and biotechnical disciplines.

“I would love to use my Russian experience and Russian language skills to work internationally on global environmental issues and policies,” Dominika said. “Aside from ballet, I got a firsthand look at Russian lifestyle and culture, and developed confidence in my Russian skills. I met many inspiring, unforgettable teachers, whose expertise had an enormous impact on my dancing and enriched my knowledge of the art form.” As a result of her hard work Dominika has also received an invitation to study at the Bolshoi Academy in their yearlong program, an invitation she is considering and weighing against her equally strong passion for academic studies.

Dominika said she created lifelong friendships, and became an ambassador of the bilateral cultural dialogue between the United States and Russia, based on shared common values. She now continues that role at GBA with other world-class talent providing instruction at GBA.

“Greenwich Ballet is widely regarded as one of the premier dance academies in the country, and we’re fortunate to be able to offer this kind of experience for Dominika, and this level of instruction,” Rivera Thurman said. “Our weeklong open house beginning September 14 is an opportunity to come see the school and meet our faculty. We invite you to join us at GBA to explore our programs.”