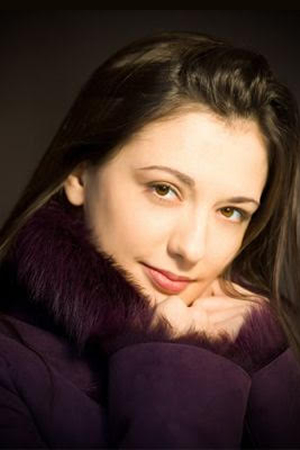 Born in St. Petersburg, Russia, Veronika Part began her early training in artistic gymnastics before entering the Vaganova Ballet Academy in 1988. Part graduated in 1996 and joined the Kirov Ballet. She was promoted to soloist in 1998.

Part’s repertoire with the Kirov included Nikiya in La Bayadère, the Queen of the Dryads
in Don Quixote, Myrta, Moyna and Zulma in Giselle, Raymonda and Henrietta in Raymonda, the Lilac Fairy in The Sleeping Beauty and Odette-Odile in Swan Lake. She also danced roles in George Balanchine’s Apollo (Terpsichore), Jewels (Emeralds and Diamonds), Symphony in C (second movement) and Serenade, and in John Neumeier’s The Sounds of Empty Pages.

Part was the winner of the BALTIKA Prize in 1999.

Part joined American Ballet Theatre as a Soloist in August 2002. Her roles with the Company include Terpsichore in Apollo, Nikiya in La Bayadère, Zina in The Bright Stream, Fairy Godmother in Frederick Ashton’s Cinderella, Twig in James Kudelka’s Cinderella, Prayer in Coppélia, an Odalisque in Le Corsaire, Kitri, Mercedes and the Queen of the Driads in Don Quixote, Glove Seller in Gaîté Pasrisienne, Myrta in Giselle, Queen of Shemakahn in The Golden Cockerel, An Episode in His Past in Jardin aux Lilas, leading roles in Ballet Imperial, The Leaves Are Fading and Mozartiana, Manon in Lady of the Camellias, Lescaut’s Mistress in Manon, His Friend’s Wife in The Moor’s Pavame the Sugar Plum Fairy in Kevin McKenzie’s The Nutcracker, Clara, the Princess in Alexei Ratmansky’s The Nutcracker, Emilia in Othello, Other Dances, the Chief Nursemaid in Petrouchka, Eldest Sister in Pillar of Fire, the Polovtsian Princess in the Polovtsian Dances, The Siren in Prodigal Son, Raymonda, Henrietta, the White Lady and the Lead Spanish Dancer in Raymonda, Lady Capulet in Romeo and Juliet, Princess Aurora and the Lilac Fairy in The Sleeping Beauty, Odette-Odile, the Polish Princess and a Big Swan in Swan Lake, the Sylph in La Sylphide, the leading role in Les Sylphides and Symphonie Concertante, Sylvia and Terpsichore in Sylvia, the second movement in Symphony in C, The Awakening Pas de Deux and roles in Bach Partita, Birthday Offering, The Brahms-Haydn Variations, Duets, The Garden of Villandry, Monotones II, Overgrown Path, Seven Sonatas, Sinfonietta and Symphony #9. She created Natalia in On the Dnieper, the Lilac Fairy in Alexei Ratmansky’s The Sleeping Beauty, the Blue Pas de Deux and leading roles in Dumbarton, Kaleidoscope, Triptych and Within You Without You: A Tribute to George Harrison.

Part was promoted to Principal at the American Ballet Theatre in May 2009.