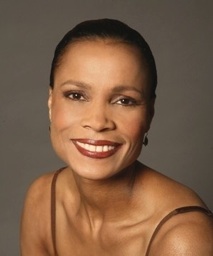 Born in Vienna, Austria, Christina began her dance education at age seven.  She trained at the Boston School of Ballet, the School of American Ballet and the Dance Theatre of Harlem.  By the time she was seventeen she began her professional career.

She was a member of the Boston Ballet for two years before joining the Dance Theatre of Harlem, where she rose to become a principal dancer during her 13-year tenure.  She danced leading roles in much of the company’s repertoire, including Swan Lake, Giselle, Firebird, Voluntaries, Prodigal Son, The Four Temperaments and Fancy Free.

Ms Johnson has worked with distinguished choreographers and coaches, among them, Jerome Robbins, Frederic Franklin, Suzanne Farrell, Allegra Kent, and Sir Anthony Dowell.  She also has had original works createdfor her by Glen Tetley, Rui Horta, Alonzo King and Dwight Rhoden, among others.  She was a member of the Swiss companies, Le Ballet du Grand Theatre de Geneve for five years and the Ballett Basel for two years, where her repertoire expanded to include works by William Forsythe, James Kudelka, Ohad Naharin, Jean-Christophe Maillot, John Neumier, Twyla Tharp, Amanda Miller, Richard Wherlock and David Parsons to name a few.  Ms Johnson has been a featured guest artist with various companies worldwide, including the renowned Royal Ballet of London.  She is a founding member of Complexions Contemporary Ballet in New York.  Ms Johnson made her Broadway debut in The Red Shoes.  She is also featured in The African Americans, a book which portrays accomplished African Americans in various fields.

After her performance career Ms Johnson has been sought after as a teacher, coach and ballet master and has worked with companies such as the Dance Theatre of Harlem, Washington Ballet, North Carolina Dance Theatre, Gotesborg Ballett, and Les Ballets Trockadero de Monte Carlo to name a few. Ms Johnson assisted Frederic Franklin in the staging of Giselle for the Joffrey Ballet.   She has also assisted choreographer Dwight Rhoden with his creation of Carmina Burana on Ballet Met, as well as the staging on Pittsburgh Ballet Theatre.   She also staged Rhoden’s Ave Maria for Ballet Arizona and North Carolina Dance Theatre.  In addition she held the position of Rehearsal Director for the Cedar Lake Contemporary Ballet in New York and has since worked as assistant to choreographer, Nicolo Fonte.  Ms Johnson cont

GBA is a great school for the serious student who has dreams of pursuing a career in ballet. The teachers are wonderful, the classes are small and the students receive a lot of individual attention. In the few years that we have been part of the GBA family, I have seen a dramatic improvement in my daughter’s technique. The students learn from faculty trained in the Vaganova style, all of whom have had illustrious careers as dancers. There are also very talented guest teachers who visit the schoo… END_OF_DOCUMENT_TOKEN_TO_BE_REPLACED