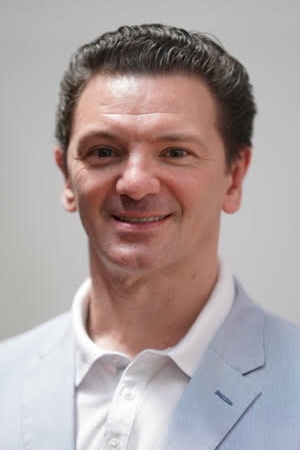 Mr. Jouravlev studied at the famed Perm State Choreography Academy in Russia and went on to become a Principal Dancer in the Perm State Opera and Ballet Theatre. He won a Diploma and the Silver Medal in international ballet competition in Russia.

Mr. Jouravlev toured internationally with the “Stars of the Kirov and Bolshoi Ballet”. He has been in performances in England, Italy, Japan, China, Czechoslovakia, Poland, South Korea and Germany. Mr. Jouravlev has toured with American Ballet Theatre Principal Nina Ananiashvili in Japan and South Korea, where he danced Espada of “Don Quixote”. This Performance is available on video around the world. Also he toured with Bolshoi Theatre Principals E. Maksimova and V. Vasiliev in Tokyo and Osaka.

After the Jackson Ballet Competition he joined the New Jersey Ballet as a Principal Dancer. He danced with the “Stars of American Ballet” during a 1997 summer tour in China. Mr. Jouravlev has performed the ballets of George Balanchin, Agnes de Mille , Antony Tudor, Paul Taylor and worked with contemporary choreographers Robert North, Margo Sappington, Donlin Foreman and many more.He has performed in over thirty Principals roles in classical and contemporary repertoires including “Giselle”, “Swan Lake”, Sleeping Beauty”, “Don Quixote”,The Nutcracer”, “La Bayadere”, “Spartacus”, “Raymonda”, “Romeo and Juliet”, “Coppelia”, “Cinderella”, “ La Sylphide”, “Serenade” “Theme and Variations”, “Carmen”, “Who Cares”, “ Death and the Maiden”, “Antre Dos Aguas”, “Belong”, “Allegro Brilliante”, and others.

GBA is a great school for the serious student who has dreams of pursuing a career in ballet. The teachers are wonderful, the classes are small and the students receive a lot of individual attention. In the few years that we have been part of the GBA family, I have seen a dramatic improvement in my daughter’s technique. The students learn from faculty trained in the Vaganova style, all of whom have had illustrious careers as dancers. There are also very talented guest teachers who visit the schoo… END_OF_DOCUMENT_TOKEN_TO_BE_REPLACED